Up four thick wooden steps and you enter a sparse, simple and magical space. Worn, wheeled, woody and very calm. Many others will have shared my thought that I could live here. Its various previous inhabitants might not have been quite so enamoured with the straw-stuffed sack on a narrow bench for a bed-seat, or the smoky stove, or the lack of anything much else in there. Although it probably provided the best comfort they could reasonably expect.

This little hut is so compelling because it encapsulates the simple life. Despite most holiday shepherd’s huts being made new, they evoke the habitat of a be-smocked shepherd (with crook and clay pipe) spending his or her days tending ruminants in a rural idyll. They wouldn’t have much stuff, but plenty of being out and about in a pure world. Exactly what many people hanker after today.

The wheels provide the prospect of further escape and adventure. In reality, most new ones can’t or don’t move far. Never mind, they look like they could be hooked up to a heavy horse and off you go to Whoknowswhere.

We moved to the south-west corner of Shropshire in 2003 to set up Spacescape Architecture & Landscape after working for others for the previous 12 years in and around Cardiff. ‘We’ being Annie Millen & Nick Dummer, landscape architect & architect respectively.

We won a design competition for a regeneration scheme in Stockport soon after, and did some other interesting projects. Then we recognised the potential for a parallel business to design and make timber cabins – good wood and the knowledge of how to work with it being in plentiful supply hereabouts. So we set up Morphut Ltd in 2011.

We thought it should be possible to make contemporary cabins that had the robustness and simplicity of the original shepherd’s huts. Minus the wheels but plus upgraded heating and sleeping arrangements. We designed a modular system using locally felled and processed Douglas fir for frame and cladding, and it proved to be so.

The first Morphut was built as occasional accommodation, and comprises a living room/kitchen, shower room and bedroom, with upper level sleeping and storage platforms. It is insulated to a higher standard than new houses, and can be extended by adding frame and panels at either end. The system also works well for meeting/teaching rooms, canteens and campsite shower blocks, amongst a wide range of other uses. 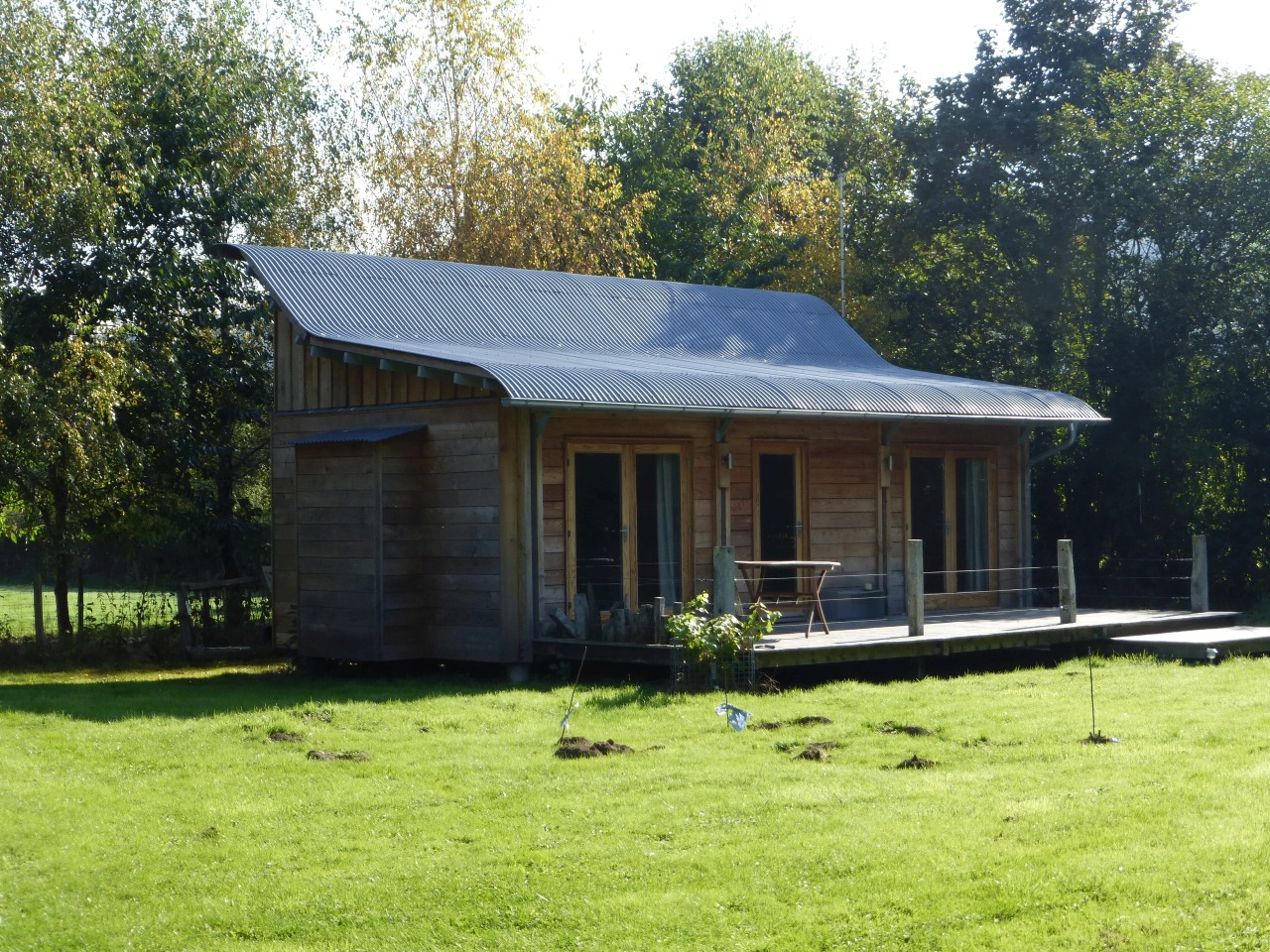 A weekend away in a camping pod led us to realise the same sound design principles employed for Morphut could be applied to smaller units, and we developed Morphpod in conjunction with an engineer and a planner.

Morphpod is based on a standard ‘box’ to suit several general scenarios, made to work for specific ones by adding elements from a set of optional extras. They come in two sizes, 2.2 & 3.4. These numbers are the internal width in metres, but also indicate how many they accommodate. We use standard and readily-available materials such that the construction is robust and wastage is minimised. The few bits that need to be bespoke are; and all can be got within about 20 miles of our base.

Panels are made up in our workshop, and the Morphpod can be assembled from them there and transported on a standard trailer or flatbed truck, or put it together on site from the panels and components. This is particularly useful if the terrain or access is tricky. Plus it means Morphpods can be located in places unsuitable for tents, wagons or caravans, thus making the most of interesting campsites.

Although they can be used for various purposes, as avid campers ourselves we like them best as camping pods. We reckon that people upgrading from a tent, or wanting the camping experience without the drawbacks, will probably want to see the surrounding landscape from inside the pod, and cook and sit outside it, under cover. So Morphpods have a big, full-height window, and a generous veranda. Both have proved very popular.

The shape and materials derive from functional factors but they weather gracefully over their long lifetimes, as small rural buildings have always done. We are particularly sensitive to where they are best located; how they nestle in to the landscape from various viewpoints near and far, and how they are approached by guests.

Making Morphpods for garden offices and other domestic purposes as one-offs is good, but it doesn’t give us the buzz that long-term engagement with campsites does. Whilst Morphpods work well in their basic form, if anything can be added or changed to make them even better, we’ll do it. Camping in Britain is evolving, and gives more people the great experience that we know it can be, whatever their preferred form of shelter. Morphpods, and all the other alternatives to tents are part of that, and it’s exciting.