George Clarke’s Amazing Spaces third series contained an amazing “hobbit” style house – I am sure any glamping enthusiasts who saw the program would have been very impressed, certainly we thought it was the most amazing garden hideaway that we’d ever seen!

Looking very reminiscent of a hobbit hole, the hideaway was the brainchild of Olly and Tamsin in Bolton, who wanted to make their garden more interesting for their young children, and (albeit going a bit over budget) did the most tremendous job (against the most awful Winter weather I might add!), with the most magical end result.

To build the hideaway, Olly needed to dig down a few feet, which brought it’s own problems with ground water, and then the roof was then covered with earth and grass (along the lines of the Tellytubbies!) and finished off with a lovely willow tunnel to lead you to the beautiful wooden entrance. Inside, Tamsin had managed to finish off the interior beautfully, artfully lit with fairy lights and to top it off, heated by a wood burner – bliss!  The only thing it appeared to lack was a loo!

I particularly loved the escape hatches, allowing the children to scoot out of the hideaway, appearing out the side of the “hill”!  I am sure that Olly and Tamsin will get a lot of people clamouring to get them to make them their own hideaway, as it really did turn out brilliantly! 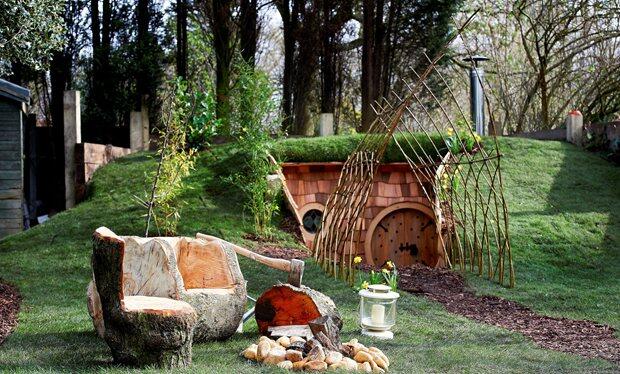